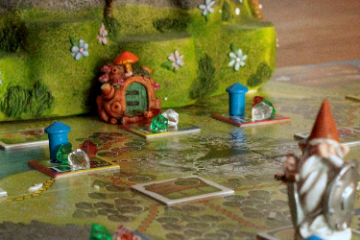 Every year Fragor Games releases one game, designed by the Lamont brothers and produced with ridiculously pretty ceramic miniatures. Last year, that game was A Game of Gnomes. It’s what it says on the box: a game, and about gnomes. Except the title and some puns in the rule book, it has nothing to do with that other A Game of …. Something that everyone is talking about, but it has a lot to do with mushrooms. And it has the largest single component in any game we have here at the Meeple Cave.

END_OF_DOCUMENT_TOKEN_TO_BE_REPLACED 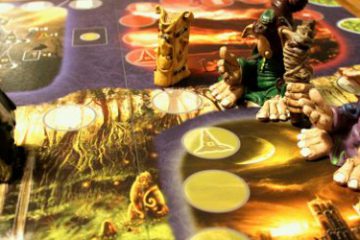 The Master Wizards all told you, don’t mess with Baba Yaga. But of course you wouldn’t listen, she is only one witch, what could she possibly do to you. And now you find yourself in the Wilderness, a few days missing from your memory and horribly disfigured, with parts of your body shrunken and grown completely out of proportion. And not in a way that you’d find advantageous. Your only way back to full humanoidity goes through Baba Yaga.