Once again, the world is in dire need of saving. But this time it is not dragons, space aliens or even the other players around the table that it needs saving from. It’s diseases – plural. From all over the world, reports are arriving about outbreaks of the four unnamed diseases: the yellow cubes, the blue cubes, the red cubes and the black cubes. The players are each a top notch specialist of the WHO, and they have to cooperate in order to save mankind

Pandemic is a cooperative game. Unlike other recent coop games, it does not have any kind of traitor mechanism. It’s all the players against the game, and either they all win, or they all all lose.

To begin with, players decide on the difficulty for the game and, accordingly, the number of Epidemic! cards. Shuffle 4 of them in the draw pile for an easy game with new players, or up to 6 of them for the heroic game.  Each player is then  randomly given one of the 5 role cards. Since the maximum number of players is 4, there will always be one role missing… but more on that later. Players also receive a number of hand cards and the pawn of their role’s color and put it down in Atlanta, right next to the first research station. Finally, the world map is seeded with diseases by drawing city cards from the infection pile and placing one to three disease cubes in the appropriate color to that city. One disease cube is enough to keep the local hospitals quite busy, while three disease cubes herald an imminent disaster.

On his turn, a player can perform up to 4 actions: 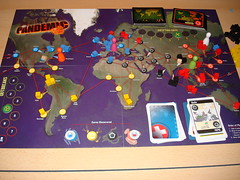 After taking her actions (or passing), the player draws new cards, hoping it’s not an Epidemic! card. Before the next player, it is now the virii’s turn. Up to four cards, depending on how advanced the game already is, are turned over from the infecion pile and one disease cube of the appropriate color is added to that city. If a city would have more than 3 cubes of the same color by adding this cube, no cube is added. Instead, there is an Outbreak. One cube of this color is added to each of the surounding cities – and yes, chain reactions can and do happen. Each Outbreak is one step closer to disaster and the demise of mankind, so a chain reaction of 3 outbreaks can often be a disaster that the players will not recover from and must be avoided.

There is a lot of ways to lose Pandemic, but only one way to win. You lose if

On the other hand, the only way to win is discovering all four cures. It is not necessary to heal everyone, but the vaccines must be discovered. While all the losing conditions seem very far away in the beginning – the player card pile is high, and there is lots of colorful wooden cubes still –  that impression is deceptive. As the game progresses, the number of disease cubes that must be added grows. And while the remaining cards on the player draw pile may be predictable, when it gets close to the end you will start wondering if that one card you desperately need is still in there or not.

Every card exists only once in the pile, so the decision should not be made lightly if you use them to fly to Osaka, or save the card for the urgently needed cure for the Red Pocks. The advantage of using one card less to discover a cure, for example, often makes it worth to wait one more turn so the Scientist can do the research insted of someone else, thus saving one card. Just as often, waiting that one turn is a luxury you do not have.

Like many other things in Pandemic, there is no right or wrong way to manage your cards. It all depends on the initial spread of the diseases, your luck in drawing cards and the roles you have available. Since there is 5 role cards, but only at most 4 players, you will be missing at least one role in every game. The roles are pretty well balanced and no combination of them makes the game significantly harder (we did find games with a Dispatcher slightly easier than games without him), but depending on what roles you have available, the strategy will change noticeably. If your game lacks the Medic, you are forced to work on the cures much faster because you lack the ability for damage control. If, on the other hand, your game has no Researcher, you can expect it too last a bit longer because you spend your time curing people that you just know are going to be sick again 2 turns later, while patiently assembling the right set of cards.

No matter which roles you have and which continent suffers most, the only way to win Pandemic is thorugh communication. Especially in the heroic game with 6 Epidemic! cards, every move must be planned, preferably one round or more in advance. You have to find the right balance between research and damage control, you have tomake good use of all role abilities, and especially you have to be in the right place at the right time. This focus on planning and communication is what makes Pandemic fun and unique – but it must be said that it is also what can make Pandemic incredibly unfun. If your group has one person that is a strong communicator, the other players can feel like pawns executing his plans at times. This didn’t actually happen for us, but only because we are all loud people here.

If you are a fan of cooperative games – or want to test the waters and maybe become one – Pandemic is definitely worth picking up. It does a great job at causing an increasing amount of urgency as the game progresses the same city gets infected yet again, while the draw pile is slowly running out. It also offers a greater amount of replayability than other coop games since the different roles and different disease spreads in the beginning make you think about your strategy again in every game. You will most likely not enjoy Pandemic if you prefer playing without a lot of planning. But if you’re looking for a challenging but beatable coop game, chances are you will have a blast.