So… all recovered from the Essen Spiel’12 and we finally got the first meeting to try some of the newly acquired games. The first one we tried was Swordfish. We tried to play it in Essen but they were always so busy and at the end only Kai got to see the explanation of the game, but didn’t play it. He was really looking forward to try.

Swordfish is a beautiful game, the illustrations are great and it has lots of small colourful components so we were really excited about trying it. The rules were straight forward and the manual in 4 languages was easy to understand. Swordfish is about fishing, well… swordfish, and then selling them for victory points. 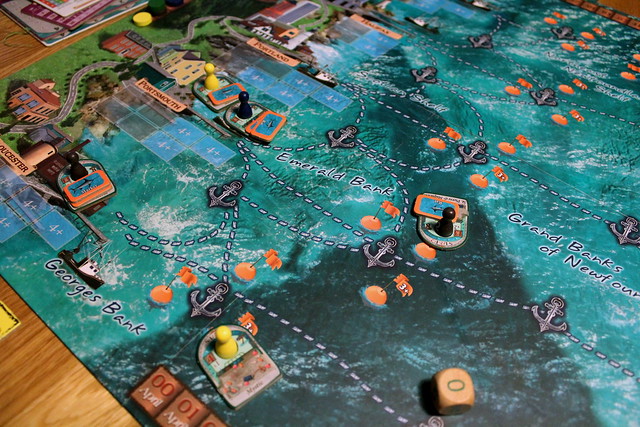 The same victory points can be then invested in hiring more captains to work for you or renting bigger and faster ships to go and fish more swordfish. We were 4 players, and since none of us had played it before we didn’t have a clue about where the mechanics of the game would take us. Each one of us tried a different harbour to start and different ship configurations. But early in the game we noticed that some of us were somehow in a very big disadvantage and, no matter what we tried, were not really able to recover.

To make it worse, the player that had chosen the best start configuration of ships and location also was the lucky one, getting the best fish everywhere he went while the others started calling the orange bag of fishes “The Shark Bag” (when you get a shark while fishing you cannot try for another swordfish and sharks can only be sold very cheap). We finished the game and kept trying to figure out how you are supposed to start in order to have a chance to win. We also couldn’t figure out a way to recover after making a mistake at the beginning which makes it a very unforgiving game. 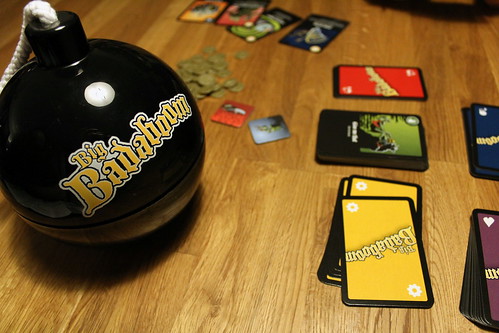 With one very rich fisherman and 3 very unhappy ones we decided to go and blow things up. In the card game Big Badaboom each player is a goblin working with bombs for an evil necromancer. When the bombs blow up the goblins die and the necromancer brings them back to keep doing their jobs. Surviving explosions, completing hidden quests and some other things earn you gold coins. The first goblin to get 10 gold coins can buy his freedom and wins the game. This game comes in a plastic bomb-shaped box that looks really cool and has good quality colourful cards with very funny goblin illustrations. We had a lot of fun playing it, specially with the bits of role playing after being blown to smithereens and brought back to life with “special” attributes like: cursing problem, lisp, mumbling, squeaky voice and so on. The game took a bit longer than we expected but I think mostly because we were not familiar with the cards and played slower than I think it should be played. I am looking forward to trying it again and the louder the players the better.