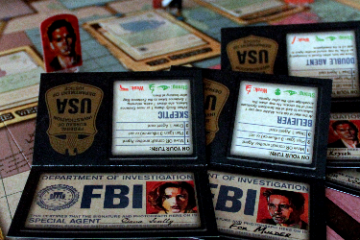 It’s safe to say that The X-Files was one of the most popular TV series created to date. (Or maybe still is, with the 2016 revival mini series ending on a huge cliffhanger.) So finding a new The X-Files boardgame published 13 years after the last episode of the original series was aired wasn’t a big surprise. There are millions of people out there with nostalgia for agents Mulder and Scully digging up alien conspiracies, and nostalgia sells. If you know me, then you know that’s why I’m skeptical towards licensed games in general. Nostalgia sells irrespective of quality. But there are good games made on a license, so lets see what side of that spectrum Kevin Wilson’s The X-Files falls on.