After Baghdad, everything else should have been a walk in the park. Should have been. Turns out I was wrong. When I reached Cairo a welcome committee of Nazi Storm Meeple was waiting for me at the airport. Fortunately, so was my old friend Fatimah – I mean professor bint Malik. You can be a female academic in 1940’s Egypt, if you happen to be the best in your field, look like a bombshell and have a reputation for knocking out a camel with a single punch. And she sure lived up to that reputation when she picked me up at the airport in a recently liberated German tank. Half a day later we were out in the desert, digging in the place the three pieces of the Amulet of Ra pointed out. You may be surprised to learn that I no longer have a problem with the snakes. It’s hard to maintain a proper phobia when you step into nests of them at every corner. But then something clicked under my shovel and this giant instrument of doom came thundering down the dune. Heavens know where that was hidden out here in the desert. Dice! Why did it have to be dice? 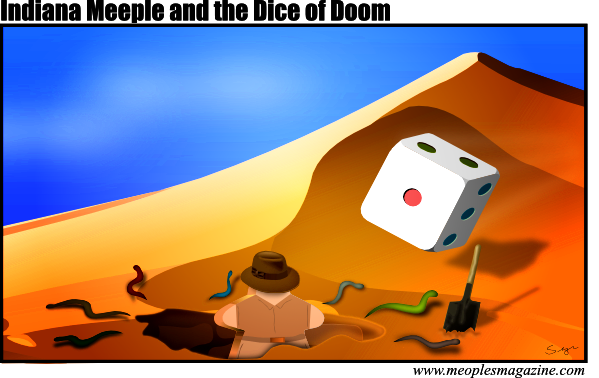