Yet another edition of Love Letter is on its way, this one themed after Alderac’s trading card game Legend of the Five Rings. Love Letter – Legend of the Five Rings’ rules are based on the first Alderac edition rules, which are slightly different from the Kanai Factory Limited Edition rules. How can a game with only 16 cards get so complicated? Anyway, Love Letter is a ton of fun, and that will be true for this new edition as well.

The newest deck-building game to be published by Alderac, Valley of the Kings by Tom Cleaver, promises to bring a new dynamic to the genre. Players are nobles in ancient Egypt, working to stock their tombs with valuables to take into the afterlife. The mechanics are typical for a deck-builder, you draw cards, use them to buy more cards and hope to score points. But points come only from cards in your tomb, and cards in your tomb are lost to you for their other uses. The challenge in Valley of the Kings will not be to keep your deck lean and efficient, as it is in most deck-builders. It’s not only easy to rid yourself of cards, it’s necessary. The challenge will be to build an engine to funnel valuable cards into your tomb, from the cards that you want to put in your tomb.

Martin Wallace is back, and he’s planning enough for this year to warrant a game subscription plan. Subscribe now, and you will receive Mythotopia, Ships, and a third, unknown game.

Mythotopia is a deck-building game with a game board attached. The idea is somewhat similar to Wallace’s A Few Acres of Snow, deck-building combined with a conflict-oriented game on the board, but unlike Acres Mythotopia is symmetric and plays with up to four players. There will be a lot of variability, each game only uses 16 of the 27 development cards and has four changing ways to score victory points, involving dragons, runestones and other fun things. You’ll also have to juggle three different resources to pay for your realm’s development and your military campaigns, build roads that let you substitute cards in your network for another and more. It reads like the most complex deck-building game to date, and that makes it exciting.

The second game, Ships, takes you through the world history of pretty much anything that moves on water. It has ships to be built in different tech levels, the world to explore in six increasingly distant zones, different goods to ship that also have a secondary use for you. Ships is a economic game with very little luck and a follow-up of sorts to Automobiles, but in Wallace’s own words “the rules […] are actually shorter than those for Automobile but I feel that there is more going on in this game.” That’s my favourite combination.

Even without knowing the third game, this is a pretty awesome package already. Game number three is mostly finished, but licensing negotiations are still ongoing. All we know is that it has a sci-fi theme. Let the speculations begin what sci-fi license this game will involved. Awesome as the package is, it’s not cheap, either. Payment is in New Zealand Dollars only, price depending on where in the world you are. For shipping to the continental EU, the price converts to approximately 172€, UK subscribers pay roughly 132 Pounds, US pays 216 USD and Canada 237 CAD. All prices are at current exchange rate and just here as a little help to decide. They may be completely, utterly wrong. No guarantees!

Relic is a Warhammer 40k adaptation of Talisman, so no one will be surprised that an expansion is coming. Nemesis introduces player versus player combat to Relic, a feature sadly absent from the base game. There will be two different modes of fighting against each other. In one, some players take evil characters from the start, their goal is to stop the other players from winning. To do that, they get the chance to play as the worst guys of the 40k universe such as Dark Eldar and Genestealers. The other mode lets you put on apostate wargear that is powerful but also blasphemous against the Emperor, so other players get to hunt you down. They have to, really. If hunting other players is not your thing, Nemesis also contains new playable characters and four new scenarios. What it does not include is a corner board like some of the Talisman expansions, but I’m sure someone is already planning the next release.

The new hero classes in Descent: Shadow of Nerekhall will create a different playstyle when they are in a game. We already saw the Conjurer and Shadow Walker in the last preview. The latest preview features the Skirmisher and the Bard. The Skirmisher is a Warrior type that wields two one-handed weapons and has much better mobility than other Warrior classes, making him a whirlwind of carnage. The Bard, forced into Descent’s class system as a Healer class, specializes in buffs and debuffs, like he is supposed to in a D&D-related system. He can use his special abilities either as the Melody or the Harmony in his songs, creating music that helps heroes and hinders henchmen in his range. 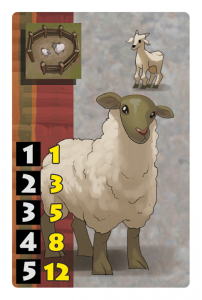 I’m a big fan of spicy food. Not a high-octane chilihead, but I like it spicier than most. A Kickstarter campaign for a game called Scoville, after the scale for heat in peppers, is pretty sure to catch my attention. In the game by Ed Marriott, players farm peppers for the heat-hungry population of the city of Scoville. To meet their needs, you harvest pepper crossbreeds from the field by placing the right types of peppers next to each other. The problem with that is that the field is communal, so to harvest what you sow you have to play smart and bid high in the player order auction. It doesn’t sound too heavy on the rules, but gives you something to think about while you play. And the theme, of course, is hot!

Among a long list of games, two releases stand out in their 2014 program. One is Xalapa, another Lauge Luchau game of arranging things by random criteria game to match his popular Uluru and the three-dimensional offspring Dimension that is coming from Kosmos. There is no information yet what will set Xalapa apart from Luchau’s other designs, but we hope to find out soon. The other one stands out for its looks, because Azteka looks great with its creepy game pieces representing the forces of Life and Death. Both sides have different goals on the round board and the “spin the Wheel of Destiny” part sounds like there is an element of luck to this abstract strategy game. You can also play Azteka in three players, then the Mummies, neither dead nor alive, try to mess with both sides plan. (via BGG News)

This week’s featured photo by Joe Pyrek shows the archaeological site of Cyrene, a Greek colony in today’s Libya. Joe shared the photo with a CC-BY-SA license. Thank you, Joe!