Skeptical as I am about movie tie-in games, the Lord of the Rings Dice Building Game by Mike Elliot and Eric Lang does sound pretty cool. It takes the basic game engine of Quarriors, the original dice building game, but uses it in a semi-cooperative game where either all players lose to Sauron or one player becomes the winner after the One Ring is destroyed. You’ll be able ro recruit famous characters from the novels (more accurately: the movie), pick up artifacts you always wanted to carry, and all of them come with a set of dice which you’ll use to defeat Sauron’s forces. It sounds very tense, and comes with a huge set of custom dice, including Gollum dice, Orc dice, Sauron dice, at least one White Tree of Gondor die and many more.

A fresh preview for a fresh scenario in Settlers of Catan: Explorers and Pirates. With each scenario revealed, it becomes more obvious that one of the main goal is to add new options to the venerable Settlers series, each scenario contains new optional elements to make them all play differently. I predict that people with either love it for that, or hate it for destroying the simplicity of the original Settlers or Seafarers of Catan. This new scenario has a new mission – that’s the more general concept of Longest Road or Largest Army – that is obtaining spices from remote island villages and bringing them back to the Catanian Council. But those remote villages have more going for them, having your merchant sit around in one also allows you to build settlements around the village tile and grants a bonus to you, things like faster ships or better chances to drive of the Pirate.

Coming in May is Five Points: Gangs of New York, a fight for control of 19th century Manhattan. Fun things to do in Manhattan at that time include gaining control of districts through your minions, influencing elections and politicians and taking control of historic structures like Tammany Hall. That last name reminds me which other game with the same theme we talked about recently, but it’s too early to tell how different or similar those two games are going to be. (via ICv2) 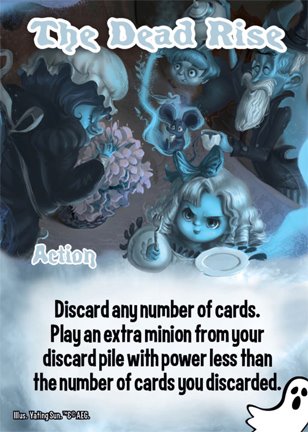 The previews for Smash Up: Awesome Level 9000 have started on the Smash Up Facebook page. First to see the light of day are, ironically, the Ghosts with their The Dead Rise card that lets you discard a bunch of cards to revive a card from your discard pile. Except if it’s a Ghost or Zombie card, I guess, then you re-undie it. Or something like that.

Owners of the old edition of Pandemic and Pandemic: On The Brink will not be able to simply pick up a copy of the new expansion In The Lab when it comes out, they’ll also need a compatibility pack that essentially replaces all the cards with new ones. I’m not happy with that additional expense, but at least it’s much better than having to buy the new edition or have non-matching card backs.

Toy Vault dropped a small PR bomb on the geek community today by announcing that they have acquired the rights to produce a line of  Firefly tabletop games based on the legendary and prematurely cancelled TV series. Also pillows and plushies, but the line of tabletop games is what gets me excited.

What would happen if Fantasy Flight Games took one of their rather popular American style games and crossbred it with an even more popular intellectual property they have the rights to create boardgames in? We’re about to find out, because Relic could be called Talisman 40k without any fear of contradiction. The fantasy boardgame has been rethemed into the grim, dark and grimdark future of Games Workshop’s Warhammer 40k, with some changes to the mechanics along the way. For instance, instead of one thread deck you now have three, pitting you against Orcz, Eldar or Tyrannid respectively. More details soon.

After the popular Discworld: Ankh-Morpork Martin Wallace is going on another trip to the Discworld, this time to the remote mountains of Lancre, home to most of the Discworld’s witches. The Witches will feature the most famous ones, Granny Weatherwax and Nanny Ogg, only in minor roles. The spotlight is on Tiffany Aching and the young generation of witches from the Discworld children’s book series, and the game will also be more family friendly than Ankh-Morpork was, with less negative interaction and a cooperative mode.

Currently on Kickstarter is Compounded: Better Gaming Through Chemistry. If you don’t think too closely about the theme – laboratories competing to synthesize common compounds like acetylene – then a mix of some luck, resource management, trading and push your luck sounds pretty good. The push your luck part comes in because some compounds are unstable and will explode when left around for too long, destroying your other work.

This week’s featured photo by Flickr user alljengi shows one of the “buildings” in the city of Petra, Jordan, entirely hewn into the rocks, façade and all. The photo is with a CC-BY-SA license. Thanks for sharing, alljengi!