If you’re following what’s going on in the boardgame world, you will have noticed something is going on. Don’t worry, it’s not the coming apocalypse, it’s the nominations for the Spiel des Jahres awards, still among the most respected boardgame awards in the world. We already presented the nominees for the Kennerspiel 2015, the award for gamer’s games, on Monday. And by presented I mean ranted about all the games missing. Today, we look at the Spiel des Jahres, the traditional award for family games.

Christophe Raimbault’s Colt Express is the perfect game to be on this list. It’s light enough to work as a family game, tactical enough to appeal to the one serious gamer in the family, and just generally a lot of fun and chaos. And it has that really cool paper train instead of a game board. Have a look at the review to learn more. (Publisher: Ludonaute)

Machi Koro by Masao Suganuma is another game I’m not surprises to see here. Of the games light enough for Spiel des Jahres, this one has been talked about more than most. Granted, the Japanese and English editions have been talked about for some time already, but the German edition by Kosmos is from last year. Machi Koro is a very small city building card game. All players start with a settlement that it is generous to even call a village, there’s just a wheat field and a bakery, and from those humble origins they must build a metropolis with a theme park and a radio tower. The money to pay for this rapid expansion comes from rolling a die that may or may not activate some of your buildings and thus give you money. Some buildings only activate with your own die, some with other players rolls, and because that’s not much interaction at all some buildings let you steal from your opponents, too. Light, quick and fun, another game I would nominate as well. (Publisher: Kosmos)

The Game is unexpected not because I think it’s a bad game, but because I simply hadn’t heard about it before. Designer Steffen Benndorf reduced a cooperative game to it’s bare bones, there’s nothing left he could possibly take away. All players hold cards with values from 2 to 99, and all they have to do is put them in order. On two stacks, cards have to be played with ascending values, on two others descending. Players may talk and strategize all they want, the only thing they may not do is tell the values of their cards. That’s enough to create tension around the table. If the idea of two stacks of cards going up, two going down seems vaguely familiar to you, Benndorf was nominated before with Qwixx that uses four lines of numbers in the same way, only with dice instead of cards and not at all cooperative. (Publisher: Nürnberger Spielkarten Verlag)

Besides the list of three nominees, the jury also creates a list of recommendations, games that didn’t quite make the Top Three but nevertheless deserve a mention. Lets see what we have there.

Cacao is a tile placement game by Phil Walker-Harding that gets a lot of value out of two different types of tiles. One type, the jungle tiles, show cocoa plantations, markets and other common fixtures of the jungle. The other type, worker tiles, are used by the players to interact with the jungle. When placing a worker, its owner may activate adjacent jungle tiles to harvest cocoa, sell cocoa at a market, take water from a well or simply stand around worshiping at a temple. When two workers stand around the same empty space, a new jungle tile is added there, creating a checkerboard of jungle and workers and a compelling game with simple rules. (Publisher: Abacusspiele)

New game mechanics are always well received, even if, or maybe especially when, they are on the wacky side. Loony Quest by Laurent Escoffier and David Franck is on the wacky side. It’s a video game for you to play on the table. Your goal is to find a way through different levels of a jump-and-run style game. But you don’t do it with a controller, you do it with a pen. On transparent plastic, you draw the path you would take through a level that you see in the middle of the table. Afterwards you put your plastic on the level to see where that path takes you. There are things you want to avoid, like bombs, bonus items you want to collect, and the whole thing ends in a boss fight. For added fun, you may also mess with your opponents and apply penalties to anyone you think is doing to well. (Publisher: Libellud)

In Patchwork, a two-player game by Uwe Rosenberg, your unlikely objective is to create a quilt. You do that with tiles in different shapes to sew into your quilt. Tiles you have to buy for buttons. Buttons you earn from having the right tiles. An interesting feature in Patchwork is the turn order. Usually it’s fixed to going strictly clockwise in family games, but Patchwork has more fun with it. Every tile added to your quilt has a time cost, the player has to move that many spaces on the time track. The player in the back, being the one who spent less time on his quilt so far, takes the next turn. A player may take some moves in a row that way. Passing your move and jumping forward on the time track is another way to earn buttons, too. Uwe Rosenberg is not generally famous for his light games, but when he makes one it’s still pretty clever. (Publisher: ASS Altenburg) 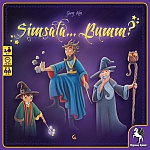 Boom is not exactly the sound you want to hear when taking your final exams at magic university. Unless you’re trying to demonstrate that kind of spell, but you generally aren’t in Gary Kim’s Simsala… Bumm?. The game takes the core idea of 2013 Spiel des Jahres Hanabi, that players can’t see their own cards but everyone else can, but makes a competitive game around it. In this one, you don’t see your own spell stones, but you still have to cast spells to pass your exam. The spells you see in front of your opponents give you some information, so does remembering which ones were already taken, and your opponents’ evil grin might also give you some hints. All in all, this might be one of the hardest exams you ever take. (Publisher: Pegasus Spiele)

It’s not so many trick taking games you see in the Spiel des Jahres recommendations, so when you do it has to have something unique. In Ugo! by Ronald Hoekstra, Thomas Jansen und Patrick Zuidhof (that’s a lot of people for a light game!), the twist is how points are counted. The cards come in five colors, and for each color you have a stack of cards in front of you. When you take a trick, new cards cover up the old ones of the same color, regardless of either cards value. So you can and will end up covering your precious eight with a big, fat zero. You also should keep in mind that, while you have to follow suit if possible, the trick goes to the highest card, whatever color it is. (Publisher: Kosmos)

You might recognize this game when you hear the original title: One Night Ultimate Werewolf, Ted Alspach and Akihisa Okui’s new take on the classic Werewolf game. I didn’t know the German title, either, but I’m glad to see this game here because I recently played it for the first time and had a loaf of fun with it. Gone is the player elimination of other Werewolf games, gone is the need for a moderator. You can still have one, but a mobile app does the job just fine. In just one night, all roles make their one move, and since some of them involve swapping role cards you may end up not knowing who you are yourself. But even knowing nothing you still have to discuss with the other players who to kill. If the only victim is a werewolf, the villagers win, and vice versa. More chaotic and less strategic than classic Werewolf, this one is also a good deal shorter and still a blast to play. (Publisher: Bezier Games)

You probably got the vibe reading through this, I’m complaining much less here than I did with the Kennerspiel. Admittedly, I feel stronger about the heavier games, but two games I expected to see here actually received a nomination, and the last one (The Game) looks like I would enjoy it in all its minimalism as well. The recommendation list shows a wide variety of different games, so everyone should see a game they like there. I don’t know, maybe that is because this list has more than three items…

I’m still happy I don’t have to pick one of the nominees to receive the award in the end. Good luck to all of them, may the game that is ever so slightly better win!